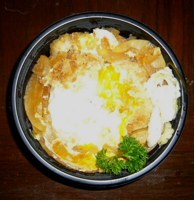 Figure 1 Source: Tilleke Gunatilaka
Donburi kanji: (丼) hiragana: (どんぶり) or sometimes refers to Donburimono kanji: (丼物) hiragana: (どんぶいりもの）is one of the most significant type of Japanese dishes. Donburi comes from a Kanji Character (丼) which means a very big bowl with rice on the bottom of the bowl and topping on top always. Donburimono is also the same as Donburi but the main difference is by adding a mono at the back. Mono (物) hiragana: (もの) mono in this place means things or stuff. By adding mono at the back it will sound more polite.

Two important elements in a Donburi are the rice and the topping. Usually for the rice part it would be the white Japanese rice or known as japonica Jasmine rice, sickly rice, and the brown rice. The topping can be anything ranging from pickles, meat, chicken, pork, fish, and other things you can’t imagine. Donburi is special because everything is put together and served on one giant bowl.

Donburi is a unique appetizer unlike Bento (弁当) and Teshoku（定食）because it is a one type of dish. But a Teshoku comes in many sets of small bowls a good example of a Teshoku would be Figure 1. But a Donburi would be something like Figure 2.

The origin of Donburi is really complicated. It estimates that during 19th century the first generation of Donburi was born the: Oyako-donburi. The first generation Donburi is considers a snack during that time. Fast forward one century later during the 1912-1926 a restaurant near Waseda University invented a famous dish that is well known till today the Kastsu-don, one of the top popular Donburi dishes.

Making a Donburi is really easy. There are many website out there that teaches you how to make Donburi. If you want to make one try: http://www.youtube.com/watch?v=YclrFezWVYk&feature=plcp  which will teach you how to cook your very own Donburi.

But if you a real fan of Donburi and have enough funds to go to the Japan be sure to have a chance and visit Uwajima province. This province is well known for the vast variety of Donburi and is also nickname for: “King of Donburi”. There are many variety of Donburi that you can taste there. For more information please click here:
http://www.jnto.go.jp/eng/location/regional/ehime/uwajima.html
or
http://www.uwajima.org/course/080910_recommend.html. 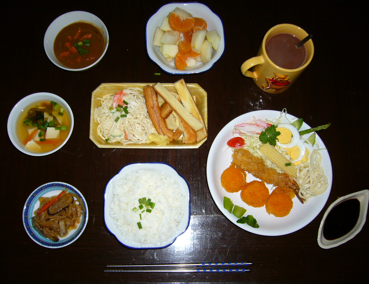