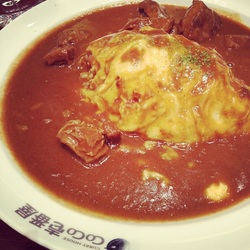 Source: Papol Dhutikraikriang
According to Cambridge Dictionaries Online, the word “Curry” refers to a dish that originates from South Asia that consists of meat or vegetables cooked in a spicy sauce. Curry is a widely known dish that has many variations in different countries in South Asia and of course the Indian-style curry would always first come to anyone’s mind when hearing the word curry since the Indians are popular for it. This famous dish that the British are obsessed with is known for its heavy spices and savory flavor that is typically eaten together with rice while on the other hand, the Japanese-style curry is much more different than one would expect.

Curry or Kare (カレー) in Japanese was first introduced to them by the British during the 1800s when the Japan once again opened its country to foreigners and soon the dish became popular. The Japanese adapted the curry recipe and the British techniques in making roux or the curry powder which was invented by the British around 1700s as to make it more convenient for them to prepare this Indian-style dish that has a complex mixture of different kinds of herbs. Later on, the Japanese chefs developed their own curry sauce that has a thicker texture compared to the Indian-style curry. The thick curry sauce compliments well with the sticky Japanese rice as the sauce does not absorbed by the rice quickly. As a result, the Japanese curry and rice or Kare Raisu (カレーライス) recipe was invented around 1910s.

Nowadays, curry is considered as one of the popular dish in Japan as there are many Japanese restaurants and establishments that are only dedicated for curry. In addition to that, the wide availability of roux in Japan has made curry preparation at home a lot easier, thus becoming one of the common household dish in Japan that the Japanese enjoy eating every day.