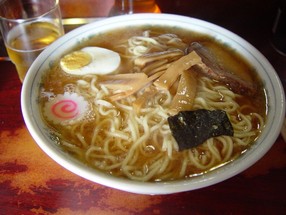 Source: Papol Dhutikraikriang
Ramen, a well known Japanese noodle dish served with broth and toppings that comes in a wide variety of combinations and flavors, is considered as one of Japan favorite comfort foods. Ramen is a Japanese pronunciation of the Chinese word Lo-Mein which means boiled noodles (Konzak, 1995). Though Ramen has its origin in China, it was recorded in the history that around 1910s, the restaurant Rairaiken in Yokohama Chinatown owned by Ozaki Kan’ichi was a pioneer to serve Ramen which is originally known as Shina soba which means Chinese Noodles (Cwiertka, 2006). This dish slowly became popular among the returning soldier during the postwar and for poor students especially the Chinese who came to study in Japan around 1895 after the Sino-Japanese war. Through the decades, Ramen has gradually been adapted to suit the Japanese taste and usually varies from region to region in Japan.

Ramen soup is generally made from either chicken or pork stock. It can be classified into four basic styles according to its soup base (Parrish, 2009). The first one is called Shoyu (しょうゆ or 醤油) Ramen which means soy sauce. This is the traditional Japanese Ramen that has a brown, transparent soup and is usually top with roast pork, bamboo sprouts, green onions, seaweed and sometimes kamaboko or sliced white fish sausage. The second one is Miso (みそor 味噌) Ramen. Miso refers to soybean paste. This Ramen has a brown, non-transparent soup and is usually topped with butter, corn and sometimes fried vegetables. The third one is Shio (しお or 塩) Ramen or salt based Ramen soup which has a clear broth. The last one is Tonkotsu (とんこつ or 豚骨) Ramen which means pork bone. Tonkotsu based Ramen soup has an opaque, white appearance that is often top with sesame seeds, boiled egg, sliced green onion and pork belly.

Aside from these four basic Ramen, there are many other varieties of Ramen that existed in Japan that were formulated to suit the taste of each Region. For instance Sapporo—the city of Ramen, is famous for its Miso Ramen, while Kyushu is known for its Hakata Ramen or Tonkotsu Ramen.

Nowadays, Ramen proves to be popular not only among the Japanese because of its affordable price and great taste, this dish is now widely available in many other countries. In Thailand there are various Ramen restaurants that you could find in mall as well as in Siam and Sukumvit area. The well known ones would be Hachiban Ramen and Oishi Ramen that could be typically found in shopping malls. These two restaurants aren’t only limited to Japanese style Ramen but they also serve Ramen that have a Thai twist to it for example, the Tom Yum Kung Ramen and Tom Yam Chashumen in Hachiban Ramen and the Ramen Phad Khi Mao Seafood/Pork in Oishi Ramen. Aside from Hachiban Ramen and Oishi Ramen, Ramen Suteiji which specialized in Hakata Ramen located in Siam Square and Bishamon for its Sapporo Ramen located in Sukumvit is highly recommended.