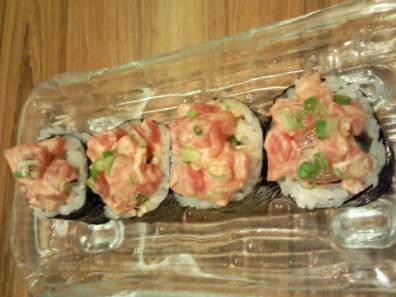 Source: Papol Dhutikraikriang
Sushi is originated in 4th century in China when people make their living out of fermented ingredients and preserved food. Sushi spread and being introduced to Japan in 8th century A.D. Sushi is being modified to a cuisine than a mere preserved rice because Japanese prefers to eat rice along with fish. Japanese used their creativity and adapted the local ingredients to make sushi for generations. At last it happens to become their national cuisine. Fermented meat, raw fish, dried vegetables and organic materials that are easily obtains in local area such as seaweed, crab fermentation, raw fish, cucumber, tamago or Japanese sweetened egg are being experimented to make sushi in which has their own unique taste. Sushi is blocked vinegared rice wraps with seaweed also known as nori (海苔) or serves with organic meat or vegetable. There are sushis everywhere in Japan and in many Asian countries and later throughout the globe. People gain access to it due to the numerous amounts of Japanese restaurants and its branches widely spread responds to the popularity of its food. Despite the varying in prices, this type of delicacy is affordable to many and they are being advertised throughout places. Sushi is popular not just because of its taste but also known for the elegant texture and attractive colors from the organic modified ingredients. Sushi has been around for centuries so the modification in food preparation advances to create a modern style of sushi. Mayo and cheese and fruits like mango, sometimes, are used as additional ingredients to the original recipe. Many forms of sushi are being made as rolls and bars. Chef usually places wasabi in between vinegared rice and a piece of sushi ingredient, for instance, sashimi to preserve wasabi flavor when being eaten. Like sashimi, Japanese usually have sushi with soy sauce and wasabi.

Sushi has become worldwide attention in 1980s when the health awareness increases. The consciousness level of humans is aware of the essential nutrients needs daily due to the development in science. People have become interested in healthy food such as organic food like sushi since it is one of the healthiest foods in the world. Sushi is purely protein without excessive amount of unwanted nutrition to one’s body. Media and business earn interest in Japanese cuisine and try to make money out of it. Therefore, making and selling sushi dramatically become more accessible to not just Asian countries but in USA and European continent.