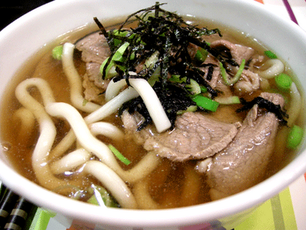 Udon noodles are thick, white noodles made from wheat and are usually served together with a hot broth called tsuyu. Udon noodles come in various shapes like round, square or flat and its soup and serving styles can varies from region to region in Japan. For instance, Fujiyoshida city in Yamanashi Prefecture is known for its yoshida udon, Kagawa for sanuki udon, Okinawa for souki udon and Aichi for niso nikomi udon. The soup of udon also differs between the east and west of Japan. In Kanto region or eastern Japan, udon soup is darker and has stronger flavor compared to the Kasai region or western Japan, that has light flavor and thin soup. Udon are usually topped with scallions, sometimes tempura, deep-fried tofu, and raw egg.

Udon is considered as one of the famous dishes in Japan and is being enjoyed by the Japanese for centuries until today. Udon has a long history in Japan just like soba noodles. Udon, just like any other type of noodles, has its origin in China. This type of noodle was first made during Kamakura Era (1192-1333 AD) in Japan and later on, became popular during the Edo period and outnumbered the soba shops in Kasai region. During the old times, Udon is a dish that can only be afforded by the higher class people but nowadays Udon is a common traditional Japanese noodle dish that can be afford by all. Today, Kagawa prefecture is considered as the country’s highest consumption of Udon noodles in Japan.