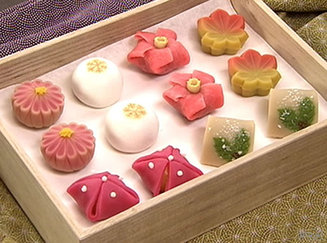 Wagashi (和菓子) is a traditional Japanese desserts originated during 700s A.D. called Nara. Wa (和) literally means “of Japan” and gashi (菓子) means confectionery. It mainly contains red bean paste and rice flour wraps around one another. The natural ingredients such as grains and fruits are being included to create variety of taste to the sweets without milk or butter being added. The ingredient, especially rice, is influenced from the Chinese and eventually gets into the hand of Japanese. Wagashi is originally intended for religious purposes. They are being given to the monks and priests to perform rituals. The religious food is being deliberately made with care and faithfulness in worshipping God so the quality is extraordinarily magnificent compares to other country sweets. People during the old days do not have access to the sweets very much because they are intentionally made for the temple and there is war going on during the time period. The sweets represent the lifestyle and arts of the Japanese ancestral roots. Mochi (餅) and Dango (団子) are first designed during this era and not many more sweets are made due to the minimal time invented into making confectionery. Despite the country conflict of war, the combinations of the art of Kyoto city and the fineness of pure handmade skill gives birth to many more traditional distinctive snacks in the near future. Furthermore, they are later happening to be one of Japanese most famous delicacies nowadays. As being seen in today’s modern wagashi, the products are significantly identical but they look ingeniously different due to marketing and packaging of each company.

Years later when Japan starts trading with foreign countries such as Portugal and Spain, they receive new ingredients to modify their sweets. As the new materials are importing into the domestics, Japanese discovers a new way to make wagashi. They use sugar from the foreign country as a main ingredient for making their desserts. This entirely changes the way of how people make desserts in Japan. In addition, Japanese dessert totally tastes sweeter and this is the major development of the new wagashi. During Edo era (江戸時代) (1603 – 1867) new recipes for making wagashi have been created and introduced to the populations. When the war is over people finally get to enjoy wagashi due to the peacefulness so more Japanese freely gain access to the sweets and many more version and designs of wagashi are being invented. The sweets finally become part of a Japanese’s lifestyle and they are used in several ways; serves in the Japanese traditional tea ceremony, as afternoon snacks, a gift for special occasions.

During Meiji period (明治時代) (1868-1912) western desserts have poured into Japan. Cake, ice-cream, and bread etc. have been introduced to Japanese and they make the best use out of them by mimicking the concept of the western plus adapting their style along with it. The modified version of western dessert gradually becomes part of the Japanese culture as being seen today. Japanese starts things from the batch and they add their creativity into it and the outcomes are immeasurable. Japanese desserts today are a phenomenon nowadays and it can be seen that they do not abandon their traditional wagashi; red bean and rice flour are always apply when it comes to sweets.