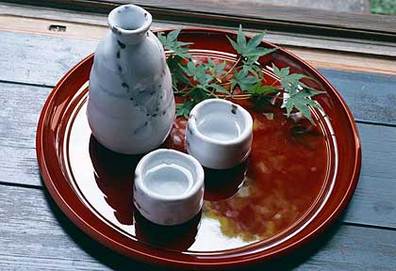 Sake (酒) or Japanese rice wine; it is a widely popular drink among Japanese people aside from beer. The Chinese character for Sake means alcohol. If you look closely at this character you will see three dots (figure 1) on the front of this character represent liquid. If you search for the definition of it will be something like this “Sake is a liquid that is made by fermentation and usage of time.” The other figure (figure 2) represents unity so if we combine figure 1 and 2 together we will get Sake which means liquid that can be unite with seeds, fruits, or etc. and involves a usage of time. Originally Sake history can be trace back to the 3rd century B.C. around the Jomon era. It is said say to be invented around during time.

Sake making is an art form (like most Japanese food and beverages); it requires delicate procedures and utmost quality.The process of making Sake is very complicated. The first step in making Sake is to harvest the rice and then select the greatest quality of rice to be fermented. The next step is to mill the rice. Then they take the rice and mix with Sake can be mainly categorized into two tastes: sweet and dry.

Sake is judged by The National Tax Office, who have the duty of sampling (sniffing and tasting) the sake to approve it for grade quality.

Sake also has health benefits from drinking or even bathing in it! It is useful with high blood pressure treatment, allergies and skincare. sake has peptide which helps with brain functions and aging. Amino acids in sake help the liver's health. To top it off, sake also gives good cholesterol for the body, resulting in good blood flow. Like tea, sake plays a role in Japanese culture, serving as one of the many signature 'traditional' beverages enjoyed amongst people or as another cultural footprint that identifies with the country for its popularity.