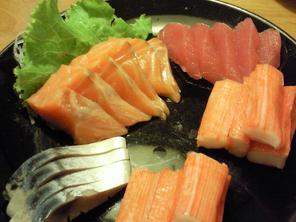 Source: Papol Dhutikraikriang
Sashimi is known as raw fish in Japanese culture. It is historically said to be a traditional dinner serves in special occasions. Many kinds of fish are used to make sashimi. Tuna or Maguro is the common fish often seen as sashimi. It is well known for its deliciousness and abundance in Japan. Maguro usually serves along with squid（蛸）, Tai (鯛) (Japan’s king of fish) and salmon（鮭） to create variety to the dish. These raw fish contain smooth texture like regular raw meat not that rotten, oily smell. The fish are fresh and being done by a certified chef. Each piece of fish is delicately sliced into a reasonable proportion approximately a one bitten size normally serves with Japanese soy sauce and wasabi. Wasabi (山葵) or Japanese horseradish is a green plant with strong flavor. It gives out a kind of hotness that burns up through the nostril similarly to mustard. Wasabi is mixed with soy sauce to blend in the flavor and adds up formality to the Japanese traditional dish. Vegetables such as grated carrot and radish are used to decorate and add colorfulness to the plain raw fish texture. Sashimi normally presents on a boat on top of ice to preserve its freshness. The cold taste complies with the original flavor of the fish to emphasize that the materials are unsullied. Sashimi could be served on top of sushi. The combination of the two ancestral food of Japan is well known throughout Asia and eventually the globe. It is part of their culture that represents the uniqueness of their cuisine. Thus, sashimi is one of the most expensive delicacies in Japan due to its formality in preparation.

However, sashimi was once was not the first choice of food for the Westerns. The difference in culture and teaching is a factor that influences their thinking; one should not eat raw food, the food should be cooked thoroughly before being consumed. Furthermore, fish is not a popular meat when compares to other ingredients found in the local area. But soon, after sashimi is being introduced worldwide by media and sources, people realize that the raw fish is not as disgusting as they thought. Sashimi and sushi, then, are available in many Japan restaurants abroad due to the cultural shifts. It becomes acceptable in the Western culture regardless of expensive prices.